Billy Williams came to colonial Burma in 1920, fresh from service in World War I, to a job as a “forest man” for a British teak company. Mesmerized by the intelligence, character, and even humor of the great animals who hauled logs through the remote jungles, he became a gifted “elephant wallah.” Increasingly skilled at treating their illnesses and injuries, he also championed more humane treatment for them, even establishing an elephant “school” and “hospital.” In return, he said, the elephants made him a better man. The friendship of one magnificent tusker in particular, Bandoola, would be revelatory. In Elephant Company, Vicki Constantine Croke chronicles Williams’s growing love for elephants as the animals provide him lessons in courage, trust, and gratitude.

But Elephant Company is also a tale of war and daring. When Imperial Japanese forces invaded Burma in 1942, Williams joined the elite Force 136, the British dirty tricks department, operating behind enemy lines. His war elephants would carry supplies, build bridges, and transport the sick and elderly over treacherous mountain terrain. Now well versed in the ways of the jungle, an older, wiser Williams even added to his stable by smuggling more elephants out of Japanese-held territory. As the occupying authorities put a price on his head, Williams and his elephants faced his most perilous test. In a Hollywood-worthy climax, Elephant Company, cornered by the enemy, attempted a desperate escape: a risky trek over the mountainous border to India, with a bedraggled group of refugees in tow. Elephant Bill’s exploits would earn him top military honors and the praise of famed Field Marshal Sir William Slim.

Pick up your copy today! 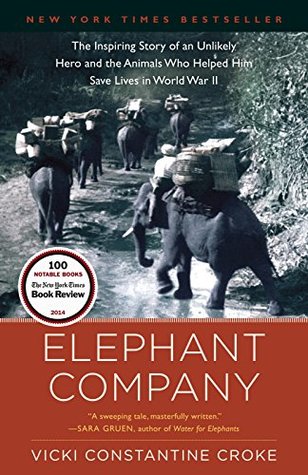